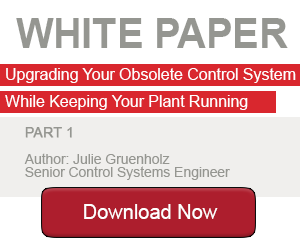 Once upon a time in about 1996, soon after I started with Hallam, I attended a meeting with my boss (our current CEO) at a customer’s site in southern Vermont. This customer manufactured machinery to finish cloth. They were in the process of transitioning from making finishing machines that were controlled with gears and pulleys to machines that were controlled with PLCs. Being new to PLC-based control systems, they had hired Hallam-ICS to install and program the control system on a couple of their first prototypes. With the success of these projects, they had come up with a plan to install PLCs on all their new machines.

So, Keith and I were there sitting at the conference table in this historic mill that was built in 1829. We were hoping that the owner was happy with our recent project performance and would consider us for future work. The owner wanted us to evaluate the plan his engineering department had come up with to retrofit future machines with PLCs. Well, their design sucked. For the owner to tell his mechanical engineer, who had no PLC experience, to come up with a PLC design for all their future tools was setting him up for failure. When asked what we thought of their plan, Keith tried very hard to be diplomatic and point out the positive aspects of the design. I, on the other hand, do not excel in diplomacy and could not hold my opinions to myself. I told the owner that his plan was terrible and proposed a better strategy. Keith’s jaw almost hit the top of the table and I was wondering if I had stepped over some line from which there was no return. After a pause, the owner said that no one had ever disagreed with him and was very thankful for my honesty. I think it actually made him happy to have another point of view.

So, Keith didn’t end up firing me – although judging by his look at me across that conference table I think my employment status was touch-and-go there for a moment. Years later, I am still happily employed at Hallam-ICS, and I am always brutally honest about the technical aspects of each project. I guess the moral of this story is that to be CEO you need a little diplomacy and to be a successful minion you just have to be technically competent.