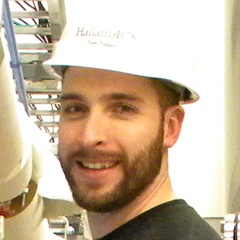 Even though I have only been with Hallam-ICS for a short time, my Hallam story begins about 5 years ago. I started off my professional career as an electrician.  After 10 years of pulling wires I made the life changing decision to switch career paths and begin my journey to becoming a controls Engineer.  Once I completed my Bachelor’s degree I found myself working at a large consulting firm and quickly realizing how much I didn’t know.  Fortunately, it was at that time I met one of the most influential people in my life.  Sam Lacasse took me under his wing, showed me the ropes and taught me so much of what I know today.  He was always there for guidance and support no matter what the circumstances were.   Over the next few years Sam became much more than a mentor. He became a good friend.

After Sam left to join Hallam I realized how important it was to be surrounded with people that are truly passionate about what they do. Work truly wasn’t the same with Sam gone; I missed that friendly work relationship and, over the next 6 months I began to look for other opportunities.  Sam soon made me aware of an opportunity at Hallam.  Knowing how Sam felt about the company, his colleagues and his experience thus far, it was one of the easiest decisions I’ve had to make.  I joined Hallam in October of 2015 and I have really enjoyed my time here.

The first project I was assigned to was for an organization that provides nutritional supplements for populations around the world suffering from malnutrition. It has been very gratifying knowing that the work I have been doing is going to such a good cause.  Even though the project has been challenging at times I have really been able to learn a lot and I look forward to applying what I have learned on future projects here at Hallam.