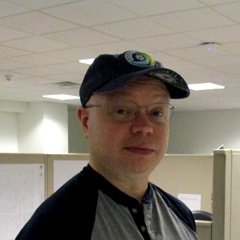 Hallam-ICS and I intersected on a few occasions prior to my joining the organization.

Our first encounter came when I worked at another automation company. We were in the middle of a transition from GE to Allen-Bradley controllers and a tight schedule did not give us time to learn new software. We contracted Hallam to program the machine. Once completed, I took the program and reverse-engineered it, thereby teaching myself ladder logic. As a result, most of my knowledge of Allen-Bradley PLCs originated from Hallam.

Approximately one year later, while working for the same company, we faced another coding crisis. The in-house developer we employed departed, leaving an unfinished project. Hallam received the contract to complete the project.

It would be over a decade before our paths crossed again. A little less than one year before I was hired by Hallam, I met with personnel in their Malta, NY office. The purpose of the meeting was simply to talk and learn more about the company. It was an informative meeting that was followed up by an actual job interview in 2013 which did result in a job offer, without even having a resume. Obviously I accepted the offer, otherwise you wouldn’t be reading this Hallam story!