In a three part blog series, I will explain the basics of the game, including the rules, positions, basic strategies, required skills, and throwing & catching techniques.  I hope this will interest you to take the game up and give it a try! 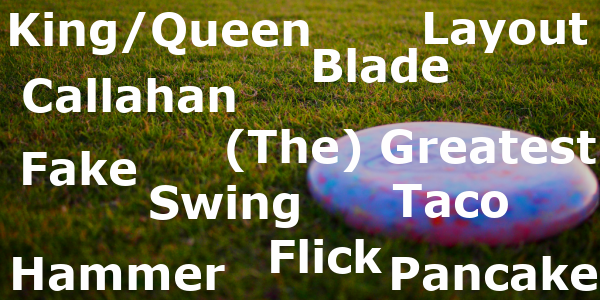 These are some of the words you might hear on an Ultimate Frisbee field. Unless you play regularly, you might scratch your head and wonder what in flying plastic they have to do with Ultimate Frisbee The good news is, you don’t have to be familiar with the lingo in order to get out and enjoy a casual pickup game. The Ultimate community is quite welcoming, and will gladly explain the basics to newcomers. Beware however, because once you get a taste of this fun and challenging game, you might end up a regular. From casual pick-up games, to competitive club teams, the opportunities to play are abundant as the sport continues to grow. In Vermont we even have an indoor league in the winter for those who can’t do without Ultimate during the cold dark winter months.


So, why is Ultimate Frisbee being blogged about? Well, because it’s a weekly staple here at Hallam-ICS during the spring, summer and fall months. Ultimate has become part of the active culture at work, getting people outside to enjoy sunshine and to get that heartrate up.  It started out with a small game on the field next to the office in South Burlington in 2013. Eventually we moved our game to Farrell Street Park, a larger field close by. We eventually asked others who work in our building to join our game, and now everyone at 38 Eastwood Drive is hooked. Well at least a few of us are!

Here, meet some of the crew: WHAT ARE THE BASICS?

SPIRIT OF THE GAME

This is what separates ultimate from other sports. There are no referees. Players make their own calls, and are expected to uphold a spirit of sportsmanship. It’s actually written in the official rules. What can you do to uphold your end of the deal? Don’t take the game too seriously, respect your fellow players, and most importantly have fun!

“Disc” and “Frisbee” are used interchangeably in Ultimate. An official disc according to USA Ultimate (the governing body of Ultimate in the USA) weighs 175g (+/- 3g), has a diameter of 274mm (+/- 3mm), and a height from top of disc to bottom of lip of 32mm (+/- 2mm). Additional criteria must be met for candidate discs to become officially approved by USA Ultimate such as catchability and comfortable grip. Discraft is a well-known brand of Ultimate discs and its 175 gram Ultra-Star is the official USA Ultimate Championship Series disc.

Here is my collection of plastic: Figure 2: Various discs from past tournaments and local sports teams First, teams must decide how to start. Typically, one or two discs are flipped in the air by opposing team members while someone calls “up” or “down” in the case of a one disc flip, or “same” or “different” in the case of a two disc flip. The team who wins the flip chooses whether to start on offense or defense, or which side of the field they will start on. Let’s say a team wins the flip and chooses to start on offense, the opposing team then gets to pick which end of the field they start on. Weather conditions will influence the strategy when selecting how to start. For example, on a very windy day, you might decide to choose the side of the field where you have the wind at your back, forcing your opponent to throw into the wind.

With 7 players from each team in opposite end zones, the point begins with the defensive (D) team “pulling” (initial throw) to the offensive (O) team. The O team must catch, or pick up the disc from the pull. They now have possession of the disc, and must complete passes to their teammates to maintain possession. If the disc touches the ground or is caught by an opponent, the disc is turned over to the D team who now play offense. This can go back and forth until a team scores. It is important to note that once you catch the disc, you must stop running. Once you’ve stopped, you may establish a pivot foot that will stay in contact with the ground at all times (no dragging allowed!). Your other foot may move around the pivot foot.

A team scores by completing a pass to their teammate inside their end zone. The receiver must not be in contact with the area outside of the end zone when they catch the disc, this includes the imaginary line that makes up the rectangular area of the end zone. Once a team scores, players reset in the opposite end zone from where they started the last point. The next play begins with the team that scored “pulling” to the other team.

All scores are worth one point. Games typically go until a team has reached a predetermined number of points, which is often 15 for tournament games. Teams must win by 2 points. A point cap (typically max score + 2) is decided before the game. So in a game to 15, if teams are trading points and the score is 16-16 due to the win by 2 rule, the next team to score will win the game because of a point cap at 17.

Soft and hard time caps are often used at competitive tournaments in order to maintain a schedule. When you hear the soft cap warning (usually the sound of a horn), you are now playing to the soft cap limit. This might be the score of the leading team + 1. So if the score was 9-7 when the soft cap came on (it’s a windy day, lots of turnovers, teams are having a difficult time scoring), then the game will end as soon as a team reaches a score of 10. When a hard time cap comes on, the game ends as soon as the current play is completed. If the game is then tied, usually an additional point is played for the tie breaker.

Pickup games don’t usually start off keeping a score. Once people start getting tired, or the sun is getting low, anyone can call a game to a point limit. If the game drags on because of the win by 2 rule, someone will often call “Universe Point” before a play begins. This means whoever scores the next point wins the game and everyone gets to go home.

There is a special scoring play worth mentioning called a Callahan. This happens when you’re playing defense and you intercept the disc by catching it in your own end zone for a point. There will be a loud cheer when this happens!

There are two main offensive positions in ultimate:

I’ve tried to introduce some basic concepts and rules of the game as part of this blog.  In my next blog, I will share some offensive and defensive strategies, as well as a few skills and moves that you can work on.  I hope you’ve enjoyed this introduction to Ultimate!