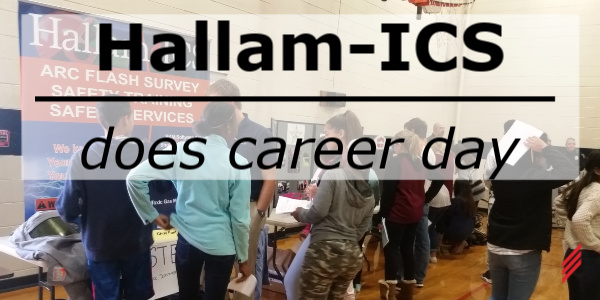 Is the 8th grade too early to start on career choices? No, it is not.  Hallam recently participated in the first annual West Lee Middle School Career Day. Hallam was one of approximately 30 attendees at the function.  There was a variety of industries represented ranging from the United States Army to the Lee County Parks and Recreation Department.

Of course Hallam was a top performer at the event; the secret was to bring a giant bowl of candy, the key to every child’s heart. All careers were categorized into clusters which helped the kids make good use of their time at the event by attending booths that were labeled in the clusters they were most interested in.  Hallam was placed into the STEM (Science, Technology, Engineering and Math) cluster where we spoke about the importance of these disciplines in our career.  It was emphasized that education is extremely important but it is also important to have good communication and to be able to work as a team. 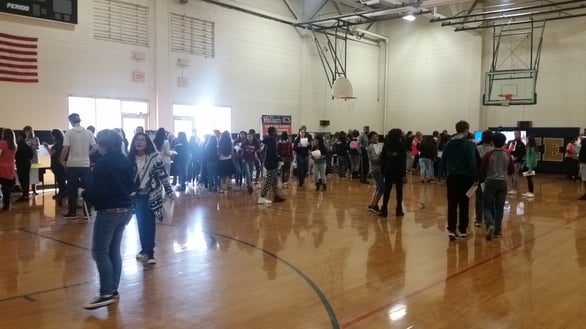 Some kids aimed to prove they’ve mastered working as a team by having one person ask continuous questions as their friends grabbed as much candy from the bowl as they could before they were noticed. Many of the middle-schoolers were excited to hear about what being an engineer at Hallam meant. We spoke about how there are many types of engineers and what different specialties bring to the table. Sample projects, textbooks, copies of the latest and greatest NEC and NFPA 70E were a few items that were brought for show and tell.  The items that attracted the most attention was the arc flash PPE.  More specifically, the 40 calorie rated arc flash hood. 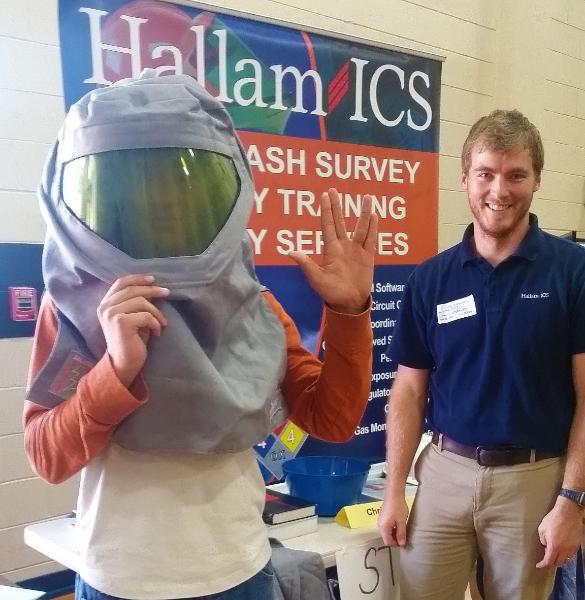 After they finished their mouthfuls of candy, if their hands were not too sticky they were granted permission to try on the gloves and hood. They quickly realized how uncomfortably hot these outfits can be, and with every exhale the temperature inside the hood rose a little more.  Being in a gym full of people producing lots of body heat, it did not take long for the hood to come right back off.  The kids asked why we need to wear such bulky, inconvenient suits.  We explained that if anything unexpected happened while working on live equipment it would save your life.  The danger caught their attention and brought on a slew of questions about the most dangerous situations we’ve encountered on the job.  What was a little more entertaining was watching the kids try to pick up pencils off the table or turn pages in a book while wearing the rubber gloves and leather protectors.  When they asked about the gloves we jumped at the opportunity to sneak in a quick physics lesson about conductors and insulators.  Then we explained how the gloves insulate our bodies from energized equipment should we accidentally touch or bump something we didn’t mean to.

At 3:00 the final bell rung and the kids rushed off for the weekend. The organizers of the event thanked us all for coming out to share our careers with the children.  The week after the event we learned that two kids who had stopped by our table were still very excited about our presentation.  One decided he wants to be a mechanical engineer and the other an electrical.  Hearing that you made a lasting impression on a child is a very rewarding feeling.

Hallam has a long tradition of connecting with college students.  Whether it’s talking about what it’s like to be an engineer, sharing the real life examples of what it takes to apply the scholar theory to practice, Hallam engineers welcome the opportunity to be guest speakers. Here we were able to do something even more interesting – sparking an interest of becoming an engineer among middle school kids.  The after-effects often bring on prolific satisfaction and a strong sense of accomplishment.  We thank West Lee Middle School for inviting us to participate in the event and also thank the students for being so attentive, respectful and eager to learn.  We hope to continue this tradition for years to come!