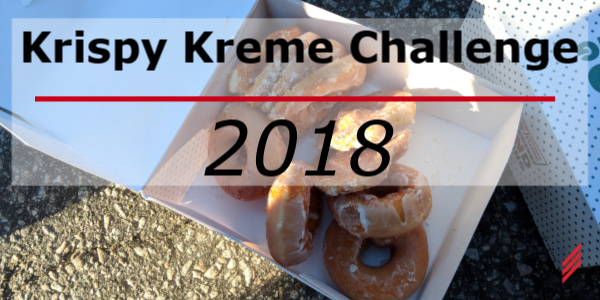 6:00 AM Saturday my alarm sings that familiar tune letting me know it is time to wake up. I take a look at my phone to see what the weather is like, 20°F, feels like 16°F – “perfect” I grumble to myself. As I roll out of bed I really begin to realize what is ahead of me.  People run outside year-round all over the country, some people would love 20°!

Once the sun comes up it’ll probably feel better, and I will be running that will make it a little better too. I start to convince myself the cold won’t be that big of a deal, but the doughnuts, that is a whole other challenge. Two and a half miles, a dozen doughnuts, then two and a half miles back how is this possible?  As if completing the 5-mile run and eating a dozen doughnuts in the middle isn’t hard enough already, I’m supposed to do this in an hour or less? Ha! The Krispy Kreme Challenge requires a great deal of mental, physical and gastrointestinal vigor.

The Krispy Kreme Challenge (KKC) dates back to 2004 when a handful of undergraduate students from North Carolina State University decided to run from the campus’s bell tower to a Krispy Kreme Doughnuts (2.5 miles away), eat a dozen doughnuts, and run back. 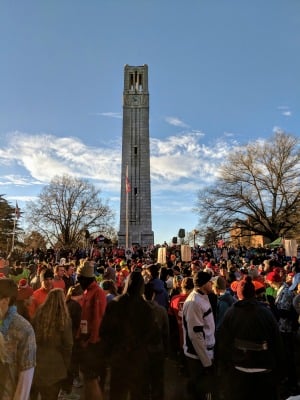 To make things even more interesting, the “challenge” is to complete this in less than an hour.

The tradition was kept up and with the support of local media, the news of the race spread across the campus, region, and state. The race received national attention in 2007 where the race earned itself the 85th position in Sports Illustrated “102 More Things You Gotta Do Before You Graduate”.  Now people from all across the country make the trip to Raleigh, NC to participate in the Krispy Kreme Challenge.

Hallam Employees Take on the Challenge

This past Saturday, February 3, 2018 nine brave souls stared five miles, 12 doughnuts, and frostbite in the eyes and said “you’re on” to the 14th Annual Krispy Kreme Challenge!

As the bell tower clock approached 8 o’clock, we took our marks, stretched a little more, and anxiously awaited the signal to start.

When the signal was given our adrenaline quickly raised and we got into our running positions and…waited. We started near the back of the pack so we had to wait for the 5,000-something other people to get moving before we could get anywhere.

Once we got about a quarter-mile in the crowd started to thin, as many of the participants choose to walk. At the one-mile marker we began dodging participants that regrettably decided to take on the challenge in costume. 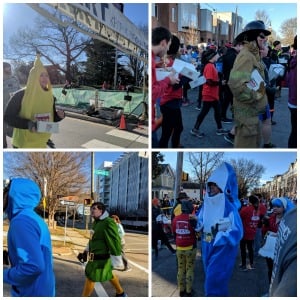 Along our journey, we saw doughnut bakers carrying/rolling a 6’ diameter replica Krispy Kreme, Buddy the Elf, Katy Perry and Left Shark, Bo "Bandit" Darville, and so many bananas.

A university swim team also decided to run in nothing else but their speedos! In addition to recognizing the top finishers of the race there is also a costume contest, encouraging participants to dress up!

As we made it to the halfway point we were congratulated with a box of doughnuts and encouraged to hurry! Our team decided it was in our best interest not to eat all 12 doughnuts. Each of us ate 3 or 4, that way we had an idea of what the true ‘athletes’ were experiencing and we were back on the road for the journey back.

The way back was mostly uphill, which made those few doughnuts we did eat feel like a dozen.

Between miles three and four we had to be very alert as many runners would decide the doughnuts had won and needed to stop immediately. We also needed to be very aware about where our steps were landing (I don’t think additional detail is necessary here). Just after the fourth mile marker we could see the tip of the bell tower and could see exactly how close we were. 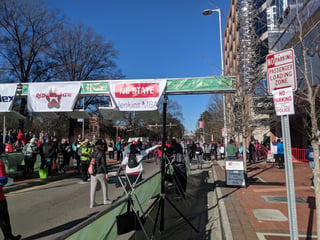 Just before the finish line is a roundabout that was full of spectators cheering and playing Tag Team’s “Womp There It Is” on repeat. The cheering was just enough of a push to get us through the finish line. Our (still unofficial) finishing time was 64 minutes, 20 seconds! Through the finishing chute we went and once we made it to the end we looped back up to cheer on the rest of the team!

It is currently 3 days post-race, I was expecting some degree of pain following the race, since there was no preparation for this event. The duration and non-deteriorating intensity was not as anticipated.  What makes this better is that I am not in this predicament alone! In the NC office, it is easy to spot the competitors. We are the individuals shuffling up and down the halls not wasting more than enough energy required to get one foot in front of the other. We are the ones with trembling arms as we try to offset the energy exerted by our lower body when we push ourselves out of our chairs. And we are those who murmur a defeating sigh when encountering with a step or set of stairs.

Although many of us were not expecting the long-lasting muscle pain, or the abnormally frigid temperatures, I am sure we will all be back to play again next year. Having an opportunity to participate in something physically challenging with your coworkers builds a very strong bond. Struggling with something and having someone there to motivate and push you along the way creates a new type of relationship unable to be achieved in the workplace. While running you are also side-by-side with thousands of like-minded participants that are happy to contribute their time and money to a charitable cause which is a reward in itself.

Racing for a Good Cause

What makes the KKC that much more enjoyable is knowing that from inception, all the profits made from the race have been donated to the North Carolina Children’s Hospital.  This hospital serves sick or injured children and their families from all of North Carolina’s 100 counties regardless of the family’s financial situation. The hospital provides care to more than 70 thousand children each year.  Many of these patients require frequent or long-term care so the hospital provides many amenities to the children giving the kids an opportunity to “just be a kid”.

Prior to this year’s race, the Krispy Kreme Challenge had raised over $1.3 million for the North Carolina Children’s Hospital and have set a goal of raising $2 million by 2020. In the second year, the organizers provided T-shirts and doughnuts to the ~100 participants for an entry fee of $10. After the shirts and doughnuts were purchased all remaining money was given to the hospital that amounted to about $1000. Last year the KKC had 6,700 participants and donated $190 thousand! 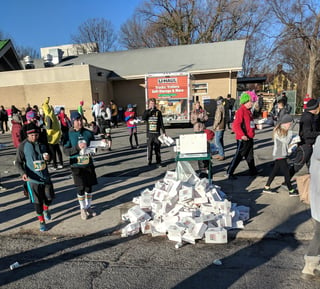 Being an engineer, I did the math. Knowing my ticket cost $35 and a dozen Krispy Kreme Original Glazed doughnuts cost $5: 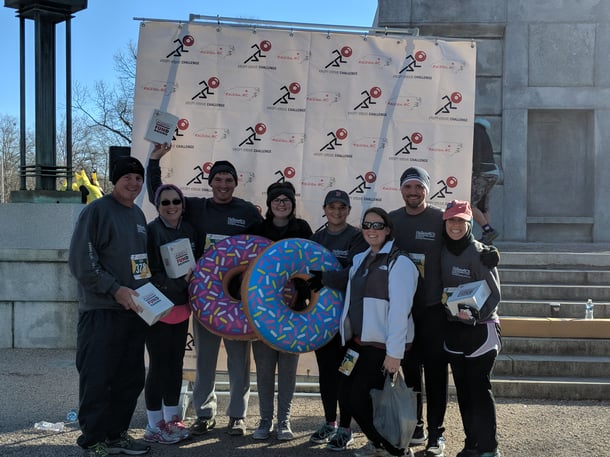 Interested in participating next year? Let us know! Even if you are not in the Raleigh-area the KKC offers the ability to run the race virtually!