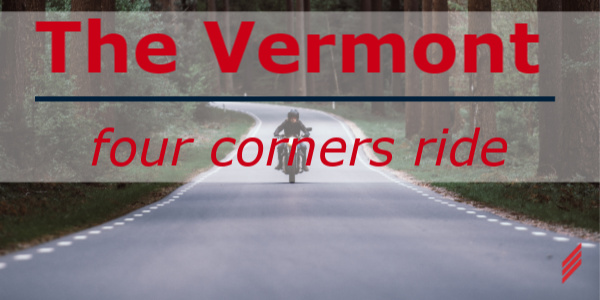 Here’s one crossed off the bucket list.   It was early morning on Friday the 11th of July, 2008. The sun was piled up behind the Mountain, and even though I couldn’t see it, I knew it was going to be a beautiful day.   This motorcycle ride needs daylight, and lots of it.This was the day to do a ride that I wanted to take for years.   It is the Vermont Four Corners Ride.    It is a ride that essentially visits all the four corners of Vermont – all in one day.    On this trip, Brian Clough was my riding buddy.   I was on my 06 K1200R and Brian on his 06 Speed Triple.

We had arranged to meet at 6:00 am at the Country Pantry in Fairfax, VT.    It seemed reasonable, as Brian was coming from Jeffersonville, and I from Essex, except there was only one problem. There was no breakfast to be had.   It was too early, even for “The Pantry”.

We headed over to the interstate and jumped on at exit 18 in Georgia.    We sailed north to 78 and headed to Swanton.  From there, it was up to Route 2 and over the new bridge to Rouses Point, New York.  We had breakfast at the Central Grill.  This is always a popular spot.  It’s just down the street and across from the US Custom’s office.   After chatting with the locals and paying our bill, the ride was on.  We headed East into the rising sun to get over Jay Peak on Route 105.  Heading up to Jay is a wonderful ride.  It is twisting uphill two-lane highway that any motorcyclist would enjoy.  There is one pull off at the top that peers down to the Southeast.  I always stop there and take it all in.

We made one stop in downtown Newport, VT at the South end of Lake Memphremagog.   I ride with Brian often, and we always make a point to stop at the docks.   For me it is an introspection into my French-Canadian heritage. You can stand at the dock and look at all the natural beauty of Quebec.  We met up with the gentleman that runs the dockside creemie stand on the Newport City Dock.  He remembered us from the last ride a month prior.  After a couple of hot coffees and a free creamie, it was of to Derby.  We zipped past Lester Pelkey’s camp and the Rider Hill motocross track and headed for open roads.

We ended up going down to Island Pond for a gas stop and then headed up Route 114 toward Canaan. 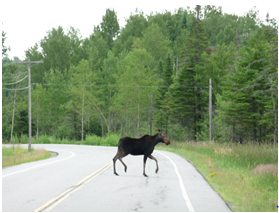 Let’s just say that the lack of cars and the twisty roads made things very interesting.  This was really the only part of the trip where we got to rip it up a little.  The Northeast Kingdom welcoming committee was on the yellow line ready to greet us when I rolled through a turn and into a long straight around Wallace Pond.  We always see Moose here in summer or winter.  At least in the summer, they will get off the trail and let you go on your way.  As far as moose go, this one was a baby at about 400 - 500 lbs.  Even if I ducked down, I probably would not have made it.

We continued to Beecher’s Falls.  We putt-putted around through town looking for a good place to call a border and we got a pleasant surprise!  We parked the bikes beside the New Hampshire sign and started poking around in the woods a little. We found the concrete monument in the Northeast corner of Vermont from 1934!  We were duly impressed to say the least!

We headed from there South on Route 102 and puttered through all the little towns.    We ended up taking Route 2 over to St Johnsbury and had some lunch at Anthony’s Diner.

We were met with a pair of Bonnevilles out for a stroll.  After a fantastic club sandwich, we jumped on the super-slab for some cruising a Harley would die for.  We gave the bikes a drink somewhere along this stretch, Barnet rings a bell.  I don’t really care for interstate riding.  We needed to make up some time, and this was a good solution.   I think I woke up around   Brattleboro somewhere.  We stopped to plan an attack on the border.  We found the town of Vernon, VT to be the most southeastern town in the State, so we headed off the super-slab for some real Vermont.  We headed down the Connecticut River Byway – Route 142.  We motored through Vernon to South Vernon.

It was there that we found out that the Town of South Vernon has a full time local constabulary.  Lucky for us, it was mid-afternoon donut hour.  There were two police cars parked in the fire house parking lot and we got there at the exact moment that they were handing the donuts from one car to the other.  We headed down the path until we arrived in Massachusetts.   It was the Town of Northfield, MA.  Oops, we missed the border.  After circling a few times to find something that resembled a border, we ended up off the bikes and on our feet again.  There had to be something.  You can’t just jump from one state to another and not have something, can you?  Sure enough, after some extensive looking, we found a stone marker from 1896 that showed the border between South Vermin, Vermont and Northfield, Massachusetts.  It was located off the edge of the road and was toppled over.  It looked like something large and heavy had sheared it off at the base, and it had been there quite a while in a state of abandonment.  OK, we came, we saw, now onward. We head back North along the Connecticut River to stop at the Vernon General Store. We gave the bikes a drink and grabbed a quick snack.

Up and across through the back roads into Brattleboro and onto Route 9, we head over to Bennington by way of the “Molly Stark Trail”.  Damn nice trail too!    We headed over to Bennington in what seemed like an instant.  Passing lanes, wide sweepers and lots of twisties made the ride that much more enjoyable than 91.  We passed through Woodford, VT.  Woodford’s fame is the largest snowmobile club in the State. They are in the National Forest, and have government maintained trails, and they have good elevation to provide plenty of snow.  You would never know that it is the first place in Vermont to buy a trail pass.  Their membership is mostly out of state riders.  The revenue from TMA sales gives them world class grooming equipment.  The trails are phenomenal.    But the town… it’s only a couple of buildings.  On a motorcycle you can literally blink and miss it.  The “Woodford Mall” is a gas station and a general store.

Bennington is the busiest corner of Vermont.  Lots of traffic, congestion, and edgy drivers.  It was dinner time, and everyone wanted to be somewhere they weren’t, including us.  We were a couple of hours off the pace.

We headed South on Route 7.  Route 7 must be the most overused highway in Vermont.  It has everything for everybody, and nothing for motorcyclists. 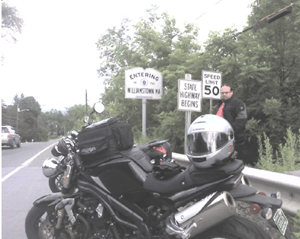 We head south for the Town of Pownal on the “Ethan Allen Highway”.  We reached Pownal and kept going until we saw the Massachusetts border signs.  We pulled off on the shoulder on the busy Route 7 highway.  This was the border between Pownal, Vermont and Williamstown, Mass.   Pressed for time and lot wanting to look too touristy on the side of the road, we took a few photos and got busy looking for a marker.  Sure enough, down off the road and off what seemed like a cliff, we found a stone marker from 1896 buried in a pile of overgrown sumacs. 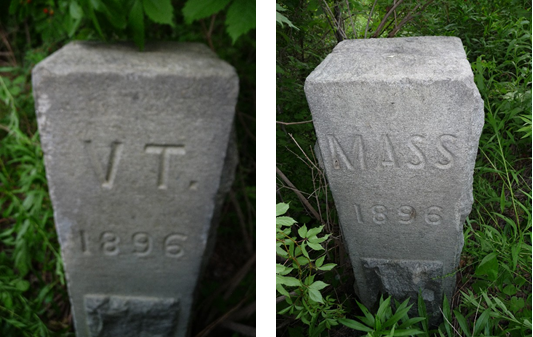 From there, we headed back up Route 7 to Essex. Brian took the lead and successfully evaded Police of all kinds, although I was biting my nails a couple of times.  We ended up in Middlebury at the National Landmark – A&W.  After talking with all the girls on rollerblades, we came to find that it was 9:35 and they just closed at 9:30, so off to downtown we go in search of a proper meal.

We end up at the Two Brothers Tavern. We park the bikes out front and headed in for a respectable meal.  As soon as we get a stool, the Tavern is overcome by Middlebury College students.  Apparently, there was a concert in the bar and we were at the center of it all. We moved over to the white tablecloth section.  We got a table next to the front window.  Outside, there was a scuffle.  The scuffle developed into a fist fight.  Police were called in.  Brian kept a watchful eye on our bikes.  Everything worked out just fine.   The best brush with the law is one you can observe, and not participate in.

We head back to Essex through Bristol, Monkton, and Hinesburg.  We get back to Essex at about 11:00pm.  We stop at the top of Sand Hill Road to say goodbye and have the ceremonial hand shake.  Total distance was 603 miles.  Average speed was 54 MPH.   We spent was too much time at zero MPH, loafing around and – of all things – eating. 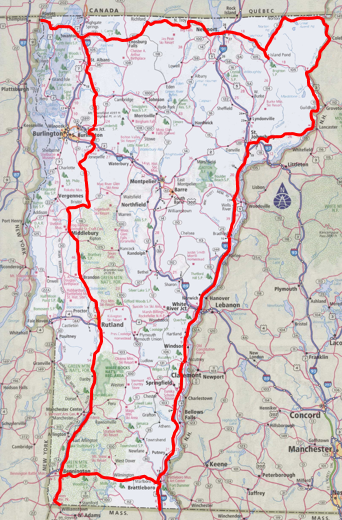 I love adventure.  My advice is to live every day and turn over new stones.  Learn, experience, and discover beyond the normal limits and boundaries.  This was a fine trip that deserved a documentary.  It was certainly more fun than staying at home.

So, we can check that one off the list.  The next ride is the Albany Trifecta; Albany VT, Albany NH, and Albany, NY all in one day.  If we can just find a route that doesn’t go through the North Conway area… the bottleneck of New England.

When off work, you can find Andy on the lake, in the woods, or on the trail.  He enjoys being outdoors and loves the adventure it brings. 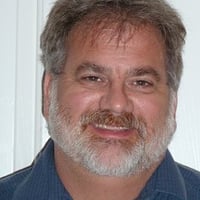