M is for Miles and Misunderstandings

This year Hallam-ICS employees and their families came together in South Burlington, Vermont to celebrate the MEP engineering and control system company’s 35th year anniversary.  As a part of this celebration, participants were invited to choose from a variety of activities to enjoy during the day before all joining for a celebratory dinner.  I am a second-year employee of Hallam-ICS from North Carolina. This is my story of how I ended up getting in way over my head.

Among the various day activities offered, one in particular caught my eye. It was the 45m bike ride from South Burlington to Vergennes and back.  I saw this as an opportunity to get to see the scenic areas of Vermont that I had not experienced previously.  What better way is there to see the Green Mountains that Vermont is named after than on a bicycle?  I knew that there would be hills, and winding roads as Vermont is not exactly known for the long, straight, flat roads that I am used to in North Carolina.  I thought that I was physically fit enough to handle these roads for 45 minutes.

A couple weeks before traveling up north an email came through describing the proposed bike route.  When I read this email my gut sank and realized I had made a huge mistake. Had I known, or conducted a little research on Vermont geography, I would have immediately realized there is no way a trip to and from Vergennes would take 45 minutes on a bicycle. A quick Google Maps search showed that a direct, one-way route was nearly 21 miles.  It was then that I realized the “m” in 45m bike ride was used as an abbreviation for miles and not minutes. 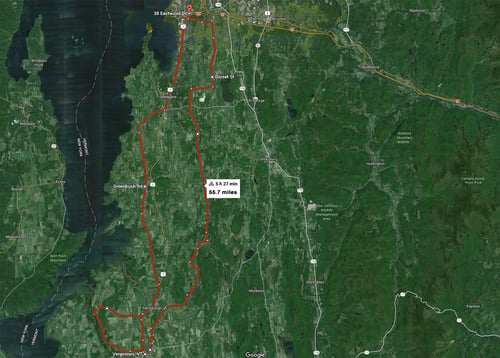 Once the team I was riding with heard of my misunderstanding, words of encouragement were showered my way. I thought if I had a good meal the night before, had a good night rest, and paced myself, I could make the journey.  The morning came and our cycling team was off to Vergennes at 9am sharp!  When we reached our first “checkpoint” the team checked with me to see how I was doing and if the pace was okay.  I was quite pleased with myself at this point and said that everything was perfect. I thought, maybe I hadn’t given myself enough credit; this was not as tough as I thought it would be.

It was not long after this checkpoint where our team encountered the first large elevation gain.  The more experienced cyclists biked ahead and waited for the rest of us at the top of the hill.  I made it approximately 50% of the way up the hill before I knew I was not going to make it.  “Ok, I will have to get off and push at some point, no shame in that” I thought.  Then about 75% of the way up, it was time.  Struggling to push the pedals any more, dizziness started to set in and I realized now was the time to get off.  Pushing the bike, I neared the top of the hill and realized I was going to have to make a stop.  Feeling queasy, I found a boulder to sit on, hoping it would ease my stomach. Not much longer until my breakfast was going to be making an unwelcomed reappearance.  I realized that I should not have accepted the free donut at Dunkin’ Donuts in celebration of National Donut Day just before my ride.  While I was attempting to make a speedy recovery, an elderly lady who was outside noticed someone on a bike go down.  She walked up her driveway, saw that I was not alone and made sure that I did not need additional help to be dispatched.

After taking a break and receiving words of encouragement from the team, I sat back on the bicycle and continued onward. When the team met up and the rest had heard what happened they explained to me how that was a big hill and not to feel ashamed or embarrassed.  I was more concerned with why they did not take any pictures and gave them all permission to take photos if it happens again.  They offered to have someone come pick me up if I’d like, it was still a ways to Vergennes.  I thought at some point I was not going to be able to make it any further but I wanted to attempt to make it to Vergennes.  The team explained how if I thought I could make it there it would be easier to have someone find me.  In the back of my mind I didn’t think I was going to make it there, I had probably only biked 10 miles of what was projected to be a 57 mile ride roundtrip.  It was going to be a long day. 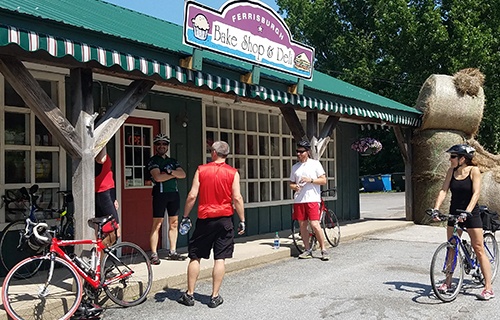 The team told me if I needed to make any stops not to be shy or embarrassed and that I would not get left behind. Naturally, they made sure to jokingly point out when we had been biking for 45 minutes to me. We all had a laugh.  It took a while longer than expected but the team eventually made it to Vergennes. Once in Vergennes the mission was to find some food.  The last thing on my mind was putting anything into my stomach but I knew that I’d better eat something.

As we were waiting for the food to come out I made the decision to continue on the bike ride after lunch. Everyone was very supportive of my decision and helped build up my confidence that I had it in me.  After lunch, the team refilled their water bottles and began our journey back to South Burlington.

The ride was much better for me after I had some food. As the day went on the team took more frequent breaks and for longer durations, making sure to take in the beauty of the Vermont landscape.  This did not negate the feelings of soreness and fatigue that had started to creep over my body.  Though with continued support from the others on the team I knew I was going to make it back.  Any time I started to slow down or fall back, someone from the team was right there with me assuring me that I could do it.

Finally, the last corner was turned and the Hallam-ICS office was in sight! Once everyone was in the parking lot, everybody dismounted and congratulated one another.  Fists were bumped, and the fives were high, the team had survived in its entirety.

Hallam-ICS is an employee owned company where teamwork, compassion, devotion, comradery, and can-do-attitude are common traits among Hallam-ICS employees. In this case my cycling team consisting of Tricia Becker, Michel Bernier, Julie Gruenholz, Chuck Rainville, and Brent Weigel helped me accomplish what ended up being a 55.7 mile bike ride, something I truly did not think I could achieve.  These traits are not limited to outside of work events.  The culture of Hallam-ICS in the workplace is very similar to what I experienced during my ride.  The individuals care deeply about what they and their colleagues are working on.  It is never hard to find a helping hand when someone is in over their head.  There is also that internal push that all Hallam-ICS employees have that drives us to make ourselves stronger and more knowledgeable encouraging others along their way.  This is what makes Hallam-ICS such a unique and fantastic place to work!