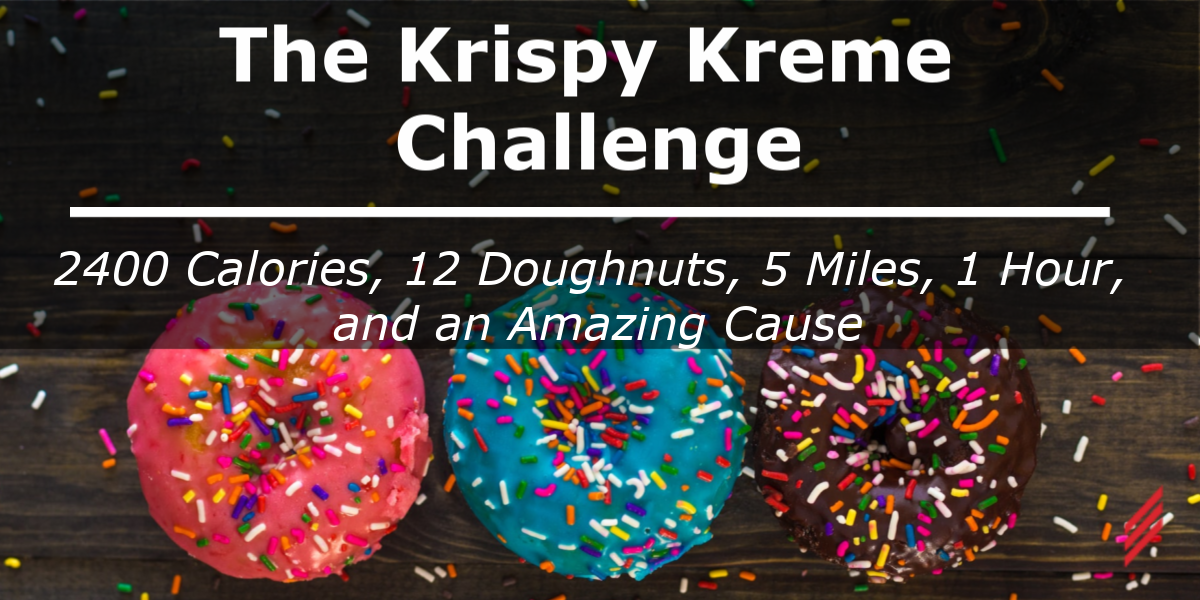 Let’s say you’d never heard of the Krispy Kreme Challenge and agreed to participate. Early one February morning your friend wakes you up and says you must get to the Bell Tower on the campus of NC State University for the race. You put on some running clothes and look at the weather as you’re getting ready – it’s 36°F and raining (2011 race weather). You think there is no way, this thing has got to be cancelled. When you get to the campus you have a hard time finding a parking spot and you start to wonder if all these people actually showed up for the race.  When you get to the Bell Tower you are greeted with 7,500 rowdies, pumped up and ready to run a race. As you look around you notice people doing stretches, people in gorilla suits, groups of people in matching shirts, families with wrapped up jogging strollers to protect their bundled-up children from the rain, and what seems to be an equal amount of people spectating. 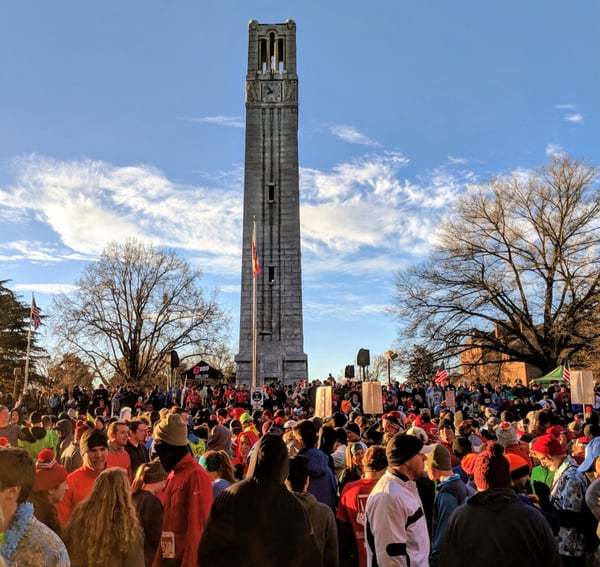 As 8:00 AM approaches all the contestants start to crowd the start line and await the signal to begin. Your adrenaline is pumping, you’re starting to get chilly, and you just want to get started.  Finally, you hear the signal to begin and… wait, no one is moving. With so many people it takes a while for you to be able to go anywhere. Once you get to the start line, you’re starting to jog.  The first half mile you’re dodging people and being dodged simultaneously.  Everyone is trying to space out at their own paces. About a mile in everyone has their space and it’s comfortable running.  This “peace” lasts for about another half mile, 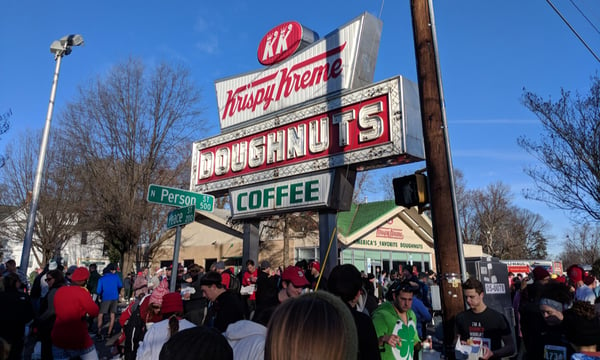 you see the Krispy Kreme shop and notice something is happening there.  People are getting boxes of doughnuts and sitting down. Someone just sprinted away from the shop.  Some people are getting the boxes and turning right around, others are furiously opening the boxes and quickly cramming the doughnuts in their mouths.  Two more people sprint away from the shop.  “What is this!?” you wonder. As you get to the shop, you’re handed a dozen Krispy Kreme Original Glazed doughnuts and are instructed by your friend to eat them all, quickly. Your friend smushes 6 of the doughnuts together to “let the air out” forming two, very dense doughnuts from the original 12 fluffy doughnuts.  You follow suite but opt to eat all 12 individually. Once you’re finished you show the empty box to the event volunteers and start the hardest part of the race, the 2.5 mile run back to where you started. 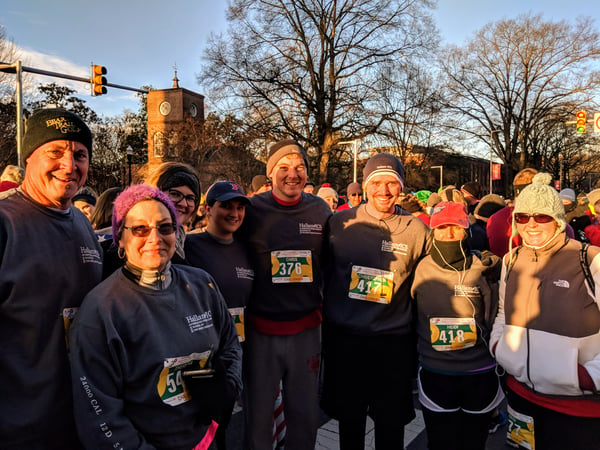 You start off at a slow, but steady pace, knowing you’ve got a belly with a dozen doughnuts sloshing around in it and you definitely don’t want to overdo it. You start to think you can do it when you’re almost immediately greeted with the course’s highest elevation gain; you’ve still got the jogging motion going on, but you know you could probably walk faster than whatever it is you’re actually doing. As you’re running back you see the people who haven’t made it to their doughnuts yet on the opposite side of the road.  It’s at this time you realize the people you saw sprinting back before you made it to the shop must’ve been so far ahead of you that they already made it to the shop and ate their doughnuts. Throughout the run back you feel pretty crummy. The people you left Krispy Kreme with who started at a faster pace you now pass as they are knelled over on the side of the road. You know what's going on, but you definitely don’t watch.  Instead you watch people around you slowly transition from a run, to a jog, to a walk, to stopping with their hands interlaced on the back of their heads. You keep up your slow jog and pass others whose partners are encouraging them “You can do it! We are only half a mile away!”. You look up and can see the roundabout that is about 100’ from the finish line and catch a second wind. There are people alongside of the road and inside the roundabout cheering everyone on and handing out orange juice and bacon to those who are brave enough to risk putting anything else in their stomachs. As you cross the finish line you are congratulated and you see the time on the clock is 0:59:59, you completed the Krispy Kreme Challenge without a second to spare! You also notice that the person you saw sprinting back before you got to Krispy Kreme is up by the Bell Tower, has a medal around their neck and is being interviewed.  They clearly won, you find out later their time was 0:24:31 and do some math in your head to figure out how fast they ate those doughnuts…If they ran a 4min/mi that gives like… woah 4.5 minutes to eat the doughnuts (actual course record holder time).

In case some of the details were missed in the scenario described, the Krispy Kreme Challenge is a 5-mile road race that typically occurs in early February.  The participants start at the Bell Tower on the campus of North Carolina State University and run to a Krispy Kreme Donuts shop 2.5 miles away. When the contestants get there, they are handed a box containing a dozen original glazed Krispy Kreme doughnuts.  They eat the doughnuts then run the 2.5 miles back.  To successfully complete the challenge, you must cross the finish line in less than one hour. The key thing to note here is that nobody forces you to eat the doughnuts. You can eat one, none or a dozen.  But to say you’ve “successfully completed the challenge” you need to eat them all.

That. Sounds. Awful. Why Should I Do It?

The question most people ask when they first learn about the KKC is “Why?”. Why would you put yourself through this, it sounds miserable? The inaugural race was in December of 2004 and stemmed from a college dare (typical, right?), the event gained popularity with the students of NC State and was listed #85 on Sports Illustrated “101 Things to Do Before You Graduate” in 2005. ESPN sent reporters to the event in 2009 and portions of the event were televised. The event has become a “right of passage” for NC State students deemed: "#1 Thing to Do Before You Graduate by N.C. State Student Government”.  If you’re an avid road racer you’d also want to cross this one off Denise Malan’s The Runner's Bucket List: 200 Races to Run Before You Die.

What truly answered the question “why” occurred while organizing the second annual race when the event planners decided to start fundraising for the UNC Children’s Hospital. 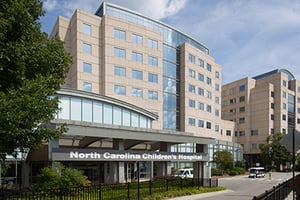 This hospital is a referral center for children with complex conditions.  It has 150 inpatient beds and outpatient center in the same facility allowing patients to see many specialists all in one trip.  The facility provides care to children from all of North Carolina’s 100 counties totaling 70,000 each year. In addition to the convenience of having everything in one spot, the UNC Children’s Hospital also recognizes that their patients are children, and children want to play and be able to experience the same things healthy kids do.  Because of this, the hospital offers many child-friendly features such as a 2-story, indoor park, an equipped music room, a rooftop terrace, and teen activity center which includes video game consoles, pool tables and air hockey tables. 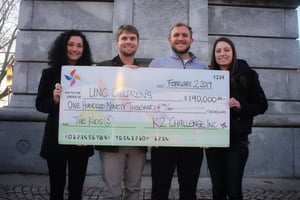 The 2019 race raised $190,000 and in total has raised over $1.6 million! With the introduction of teams and fundraising pages, the contributions are no longer limited to what the event contributes from ticket sales.  The Krispy Kreme Challenge is UNC Children’s Hospital’s largest unrestricted donor!  2020 will be the third consecutive year Hallam-ICS has registered a team and second year we have participated in the fundraising. We have a mix of people, some run, some walk, some dress up in costume, others come dressed to win. Friends and family members of Hallam-ICS employees are often included in the make-up of the team. 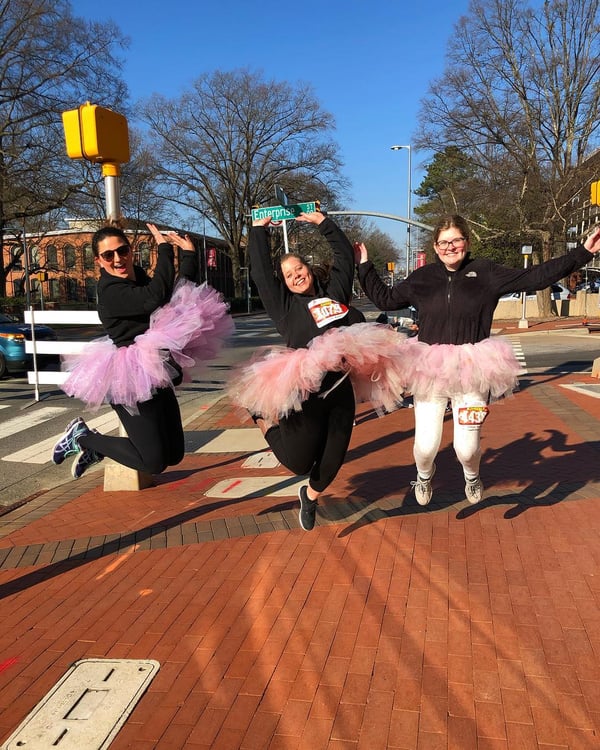 The event is one of our office’s most-anticipated events of the year. We usually accompany registration time with a fun video sent company-wide, custom sweatshirt designs, and figuring out what costume or theme our team should incorporate. We also encourage our offices outside of North Carolina to participate in the Virtual Race.  Friends and family members have also been fairly regular.  Because of this we get to know who we work with every day a little better and learn some things we might not have known about who we sit next to.  Always in our minds is the fact that what we are doing has a purpose, we are lucky to be healthy and capable of participating in these events and we know that not everyone is so lucky.  Knowing that we are participating in a cause that helps provide the care and comfort to children who are sick means the most. 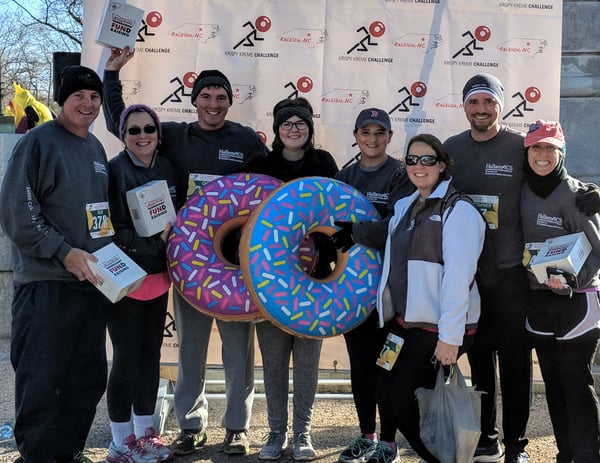 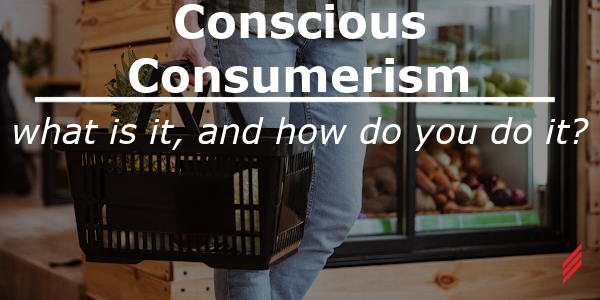