Millions of Revolutions (the pedaling kind) In The Green Mountain State 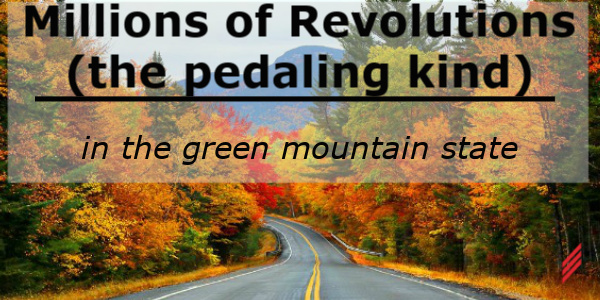 How well do you know Vermont? Have you heard of and can you readily locate the towns of Athens, Baltimore, Halifax, Holland, Jamaica, Landgrove, Peru or Victory on a Vermont map? Have you ever heard of Vermont places like Felchville, Hortonia, Mosquitoville, Goose Green, Goose City, Nashville, Moscow or Podunk?

I have lived and worked in Vermont all my life yet my travels in this state have often involved using the familiar main highways and routes like I-89, I-91 and Routes 2, 4, 7, 15 and 100 for example. Until recently there were many towns and places further off the trodden routes which I had never traveled to or in many instances had ever heard of. 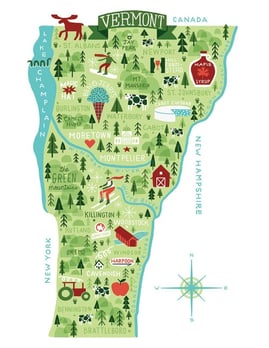 I am honing-in on completing a couple of cycling quests that have me journeying throughout Vermont discovering the roads and personalities of the less familiar towns and places.

I enjoy biking. Now more than ever. Since learning to ride, and except for a stretch from my mid 20’s to mid 30’s, I have biked all my life.  I enjoy being outdoors, the challenge and sense of achievement I get from quietly transporting myself under my own power, the health benefits and the uplifting endorphins that come with this fun form of exercise. Vermont offers some very good places for cycling with mountain views, varied terrain, old country stores, shaded town greens, over 100 wooden covered bridges, over 200 lakes, ponds, reservoirs and rivers and over 200 marked historical sites.

Though there are some aspects to cycling I find less than pleasant like impatient motorists, crazy loud motorcycles, motorcycles with obnoxious music players, aggressive dogs and roads in poor repair, all things considered I still enjoy it tremendously. Newly paved roads, hard earned descents, babbling brooks and sightings or encounters with wildlife are just a few examples of things better experienced while traveling by bike than by motor vehicle.

I’ll relate one wildlife encounter I had this year that I found amusing. While riding a section of Route 4 in Hartford that is sandwiched between Interstate 89 and the White River I watched a red fox cross the road about 100’ ahead of me from the river side and disappear into a wooded area at the edge of a home property on my right. Moments later a cacophony of clucking from the wooded area was quickly followed by one chicken flying out and landing in the middle of the road 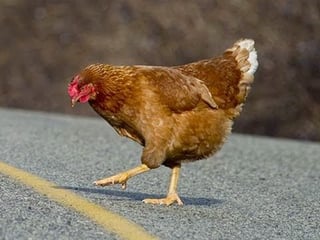 ahead of me with the fox doubling back in pursuit. At this point they were 25’ in front of me with the fox closing in and with its focus entirely on the chicken when it caught the first site of me approaching from its side. Seeing me as an instinctual threat, though at that moment I was having my own “what-if” thoughts, I watched its startled reaction to me and it immediately abandoned the afternoon lunch plan and ran back off to the same side of the road it first appeared from. I passed through and watched the chicken remain motionless in the middle of the road with my eyeglass mirror until I was well down the road. I surmise it was either preparing for another surprise attack or collecting its wits from the near-death experience. Assuming the fox didn’t return and the chicken didn’t get hit by the next vehicles passing through, I think it’s safe to say I saved its life and it got to live another day.

The biking I enjoy is road biking on mostly paved roads with what many people refer to as “skinny” tires, inflated to about 100 psi. My bike is a hold-over 2007 Spanish made carbon fiber Orbea Onix that I purchased at Earl’s Cyclery in 2008. It has a 34-50 compact crankset, an 11-28 ten speed rear cassette and weighed about 17.5 pounds as purchased without any accessories or pedals. I’m approaching having cycled 30,000 miles with it. One of my accessories is a Garmin Edge 705 bicycle computer to record my mileage, speed, average speed, maximum speed, % gradient, total feet of elevation ascended and descended, elevation profiles, bearing, heart rate, calories, maps and more.

Another interest of mine, albeit a peculiar one, is for maps.  I readily acquire them and kind of have a growing collection. Traveling without maps in an unfamiliar place can certainly make for more excitement and memorable experiences but when I travel I prefer to do so “with a plan” and an understanding of where I’m heading and what to expect along the way. And so cycling and maps together with a longtime tendency for keeping trivial notes and records, have been driving some of my recreational cycling pursuits of the recent past and, with good fortune, my probable future.

In 2010, after having cycled locally over many roads of northwestern Vermont and in various benefit and biking group rides in other parts of Vermont, I tallied that I had ridden some part of the roads in 120 of Vermont’s 251 cities and towns (9 cities and 242 towns). Seeing how I had ridden in nearly half of these, I set a goal of riding some stretch of road in every one of the cities and towns and in the process get to better know my home state. In addition to the 251, Vermont also has 3 Gores, and 1 Grant which are unincorporated land areas that are not part of any town and have limited if any self-government.

These are essentially surveying left overs and at one time Vermont had more than 60 Gores. Some interesting history about them can be learned at Vermont Digger.

When planning my trips I mapped out rides using my Vermont Atlas and Gazetteer on connecting roads that traversed as many new towns as possible. These Atlas maps are what I navigate with on my rides, folded to fit into a plastic sandwich bag for protection from perspiration and unplanned precipitation. An example of a looping ride that commences and finishes in the same location without any duplicated roads is Routes 114, 102 and 105 in the Northeast Kingdom. This 67.3 mile ride passes through Brighton, Morgan, Warren Gore, Norton, Averill, Canaan, Lemington, Bloomfield, Brunswick and Ferdinand. I completed this ride with a cousin in the fall of 2012, averaging 15.6 MPH.

I typically drive to the location of a planned ride often after having become a little familiar with the area by viewing satellite images. On a number of occasions for more distant reaches from South Burlington, like the Northeast Kingdom or the southernmost Windham and Bennington Counties, my wife Cindy has accompanied and supported me and we made it a two or three-day Vermont discovery trip. While I was turning the pedals over and tracking down new never-before ridden in towns, Cindy was discovering country stores and craft shops and identifying a good place to meet for lunch or for dinner in the evening.

You may be familiar with the Vermont 251 Club 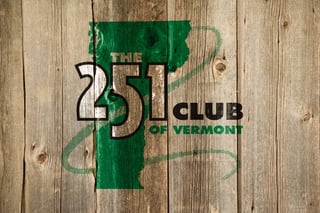 where members set out to discover and record their visit to each of the 251 towns and cities in Vermont. Members do this most often, but not exclusively, by vehicle and usually by locating an identifying structure like a Post Office. If you’ve not heard of it and are curious, checkout their website with listings of the towns, Town Boundaries Map and other info.

In the Home Stretch of the First Quest

This year after picking up 7 more towns on a spring trip to Bennington County with Cindy supporting, I have now ridden some part of 249 of the 251 cities and towns. The only towns I have yet to visit are Lewis in the Kingdom and Glastenbury in the Green Mountain National Forest in Bennington County. Neither of these towns has paved roads and not that many gravel roads either, both are heavily forested. The absence of asphalt however will not deter me as I have encountered a fair share of dirt roads in my travels. Surprisingly to me at least, Vermont has more total miles of dirt roads than paved; somewhere around 8,000 miles. Riding these would truly be an exploration of Vermont’s nooks and crannies with lots of quiet riding well off the beaten paths.

In 2018 I hope to ride in these two remaining towns to complete this original quest. Though I hadn’t set a timeline other than “in my lifetime”, my progress came at a faster pace than I had expected when I embarked on it in 2010. Completion, whenever it happens, will be celebrated mildly because I am now in pursuit of a similar but expanded second quest.

Second Quest – How it Started

In 2015 I had about 20 remaining towns to ride in and it was becoming more apparent that I would be completing my original goal. While reading on internet sites about 251 Club members who had visited each town by bicycle, 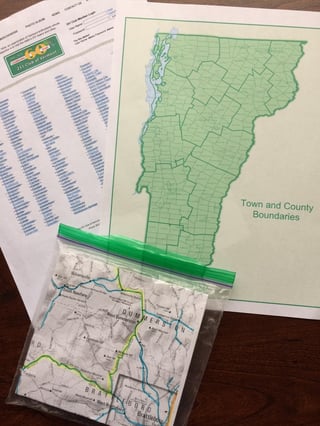 I learned about Joe Cook of Dummerston, Vermont. Joe, at a similar late 50’s age as I, completed his quest to ride his touring bike the full length of every paved road on the Vermont state highway map. An impressive achievement I thought and one that I quickly found appealing and began to consider duplicating. Though it seemed daunting I figured that I already had a good start and with enough persistence it should be possible and would certainly be enjoyable even if never fully completed. The idea of exploring and riding on more roads for the first time drew me into committing to this new goal and duplicating Joe’s feat and perhaps others like him that I’m not aware of. In 2015 I commenced with this new second quest as my original one was winding down. More on my progress since then in my next blog.