In my previous blog, I shared my quest to join the Vermont 251 Club.  While reading on internet sites about 251 Club members who had visited each town by bicycle, I learned about Joe Cook of Dummerston, Vermont. Joe, at a similar late 50’s age as I, completed his quest to ride his touring bike the full length of every paved road on the Vermont state highway map.An impressive achievement I thought and one that I quickly found appealing and began to consider duplicating. Though it seemed daunting I figured that I already had a good start and with enough persistence it should be possible and would certainly be enjoyable even if never fully completed. The idea of exploring and riding on more roads for the first time drew me into committing to this new goal and duplicating Joe’s feat and perhaps others like him that I’m not aware of. In 2015 I commenced with this new second quest as my original one was winding down.

My planning for riding all the paved roads of the Vermont official road map began with the tedious task of identifying on the 36 segmented maps of the Vermont Atlas & Gazetteer every segment of the paved U.S., State and Town roads (excluding the limited access roads and Interstates for which cyclists are prohibited) which I could discern on the Official road map. The official map is the one commonly available in every tourism information rack and many convenience stores. Paved town roads on the official map appear as solid black lines and are not identified by name or number so the process required closely comparing the form of the road to the roads of the Atlas maps which have much more detailed information including road names. I highlighted the roads yet to be ridden in blue and those already ridden in green. Once new roads are ridden I highlight them again in yellow turning these blue roads to green. 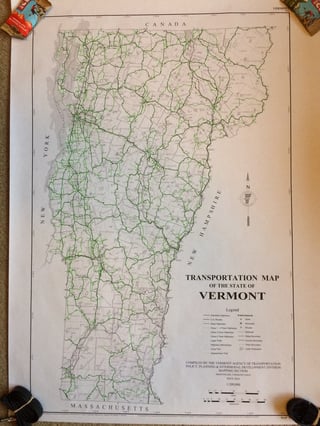 I ride these roads fully to each intersection and to the end of pavement if they transition to dirt roads. I’m guessing that I have turned around at the end of the pavement on over a hundred roads at this point. Often these are roads that branch off a more main road running along a valley floor and wind their way up a hillside. These side roads are mostly traveled by their inhabitants and most motorists likely drive by them over and over with little thought about where they lead to.

This second quest has become my new riding priority and on every occasion possible, I work in some of the never-before traveled “blue” roads. While on group rides through various parts of Vermont, I have veered off from the group and the planned route to ride a less traveled side road while I was in that neck of the woods. By the end of the 2015 riding season and with all my riding up to that point I had completed all the paved roads of the official map in 117 towns. Currently the tally is at 211 towns completed and 40 remaining. This year on 15 days of riding specifically for this goal, I completed the remaining “blue” roads in 45 additional towns, logging 882 miles and ascending a total of more than 47,000 feet.  With most of the remaining towns in the southern counties of Bennington, Windsor and Windham and with fewer roads previously ridden there, my future progress will be at a slower pace but I’m hoping to complete this this second quest in 2019.

When people become aware of my plan they often ask how many miles is that? My answer has been “I’m not really sure”. The information is not available from the official map and I had completed many roads early on without keeping records of mileage before I contemplated this project. Hoping to get at this answer from someone in the know, I exchanged emails with Jonathon Croft, Mapping Section Chief for the Vermont Agency of Transportation. He advised that the Official Map included the full state highway system and all Class 1 and Class 2 town highways, of which there are about 5,700 miles, but that it only included some of the Class 3 town highways roads. There are 8,535 miles of Class 3 roads in Vermont some of which are paved and on the official map but I believe that the majority of these roads are gravel. My estimated answer to the question right now is about 5,500- 6,000 miles. Because of a certain amount of doubling back required on many rides, particularly when unsupported, I will have ridden a fair bit more than this to complete the quest.  Determining how many miles of Class 3 paved roads appear on the official map apparently would require sifting through the detailed road information available for each town; a task that will require considerable patience that I have chosen to forgo for the time being. 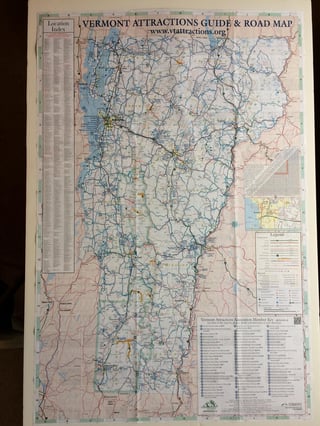 North to south, Vermont is 159 miles long between the borders of Canada and Massachusetts, so if my 6,000 miles estimate is accurate, it would be the equivalent of about 38 trips as the crow flies between these borders. Cycling 6,000 miles at an average speed of 14 miles per hour and at an average pedaling cadence of 70 revolutions per minute leads to 1.8 million pedal revolutions and probably several pair of biking shorts.

Nerdy road information for every Vermont town is available at the following websites listing total mileages for each Class of road by town, county and overall state:

I’ve successfully ridden up most of the Gap and Notch climbs in Vermont. “Successfully” by my definition means no portion is walked and ideally, but not requisitely, the climb is ridden from base to top without requiring a cardio recovery break. The list includes Hazen’s Notch (mostly dirt), Smugglers’ Notch, Bolton Notch (the Southern paved portion), Appalachian Gap, Middlebury Gap, Brandon Gap, Rochester Gap, Roxbury Gap, Mount Philo Access Road, Bolton Valley Access Road, Burke Mountain Road (but not the Summit Road) and Route 242 over Jay Peak. For bikers who really love a challenge and climbing, the “LAMB” ride which strings together the mountain crisscrossing route of Lincoln, Appalachian, Middlebury and Brandon Gaps into one day’s ride is popular. Without any question that’s a ride requiring a higher fitness level than the one I maintain!

Lincoln Gap is the one attempted climb that has eluded me thus far. My only attempt at it from the Warren (Eastern) side in July 2014 was not “successful”. My heart rate at my first at-my-limits break was 180 bpm. Shortly after resuming riding after my second stop, I rounded a bend and saw before me another long straight section of equally steep gradient to what I had already climbed. My second stop was probably only a few hundred feet further than my first and at that point I conceding to walking the remaining section.  I had cycled about halfway through the most difficult stretch of over a mile with a 20-24% gradient. I don’t know if it’s factually correct, but I have read on a few occasions that this is the steepest paved mile in the U.S. This climb was preceded on this ride by a successful summit of the Appalachian Gap from the West side but on Lincoln I had to wave the white flag and tell myself I would be back another day to try again. That day I have decided will be when I have completed all the remaining towns except Warren and with fresher legs and perhaps the benefit of a temporary reduced gearing setup or maybe simply taking as many cardio stops as needed, I aim to conquer this Gap and the town of Warren as my final ride of the second quest for a double celebration at the top of the mountain pass.

I’ll wrap this up with information from a book I read this year that makes my second quest a minor undertaking in comparison. The achievements and accomplishments of a former Vermont doctor who was a long-distance walker and occasional bicyclist as well are described in the book compiled by his daughter after his passing titled “25,000 miles in Vermont: The Walking Diary of Dr. Edward A. Keenan, Jr.”

In 1987 after his retirement and after having already walked many roads in several Vermont counties Dr. Keenan, who was also using his Vermont Atlas and Gazetteer for planning his walks, set out to walk every Class 4 road or better  in the state (except for interstates), a total of more than 15,000 miles of roads I believe. 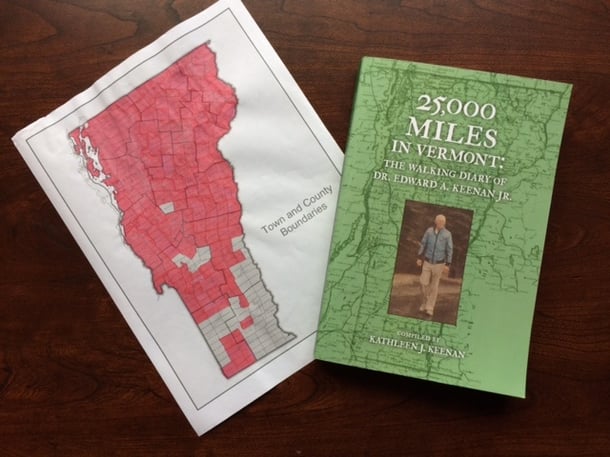 Twelve years later in November of 1999 when he was nearly 80 he completed his goal. He walked throughout those years through all the seasons and in every kind of weather extreme. He generally did this unsupported meaning that at the end of the day he had to return to his starting point and vehicle. He accomplished this with health issues like an irregular heartbeat and with the temporary setback of coronary bypass surgery. He typically logged 1,000 to 2,000 miles per year and kept a complete diary of his travels and experiences including dates, mileages, time spent walking, weather conditions and his encounters with various wildlife. Some of his other notable achievements included: