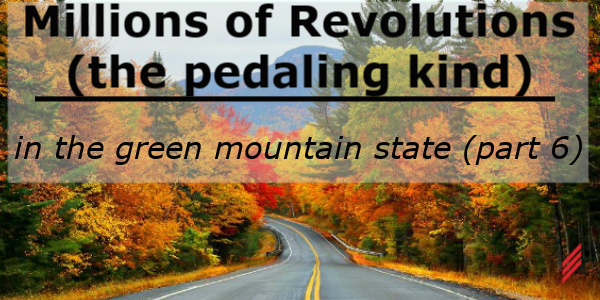 By the end of July 2018 I had roads in 13 remaining towns and cities to complete in my quest to discover and cycle all the paved roads of the Vermont Official Road Map. As the possibility of finishing this project in 2018 was becoming more of a reality I ramped it up in the month of August with four additional days of riding to bring me to the threshold of completing this quest that I began in 2015.

Riding on August 10th led to the completion of the towns of Londonderry, Jamaica and Stratton with 63.4 miles and 4700’ of climbing. In Londonderry while on the return leg of an out and back on the Winhall Hollow Road west of Route 100 I had my first and brief sighting of a bear while cycling.As I rounded a bend in the road through a wooded area, a bear cub was finishing its casual crossing of the road a few hundred feet ahead of me. Not knowing the whereabouts of mother bear and having no sight-lines into the woods, I paused in place for a few minutes just in case she happened to be trailing. After seeing no sign of her I proceeded on, relieved not to have had a close encounter!

August 19, I arose sufficiently early to make the drive south to Rutland and commence riding with the 5:55 AM sunrise to complete Rutland City and Rutland Town. I had a segment of about 4 miles of Route 7 through the heart of the City and a few of the major side streets to complete. Route 7 here is multiple lanes, minimal shoulders, heavy traveled and generally not bicycle friendly.  It’s not the type of road I would ever otherwise ride and I had avoided it on several of my previous rides in the area. My strategy on this day was to ride it in the quiet of an early Sunday morning before most people began to stir from their beds and take to their vehicles.

I launched from the DMV office in the north end of the city and rode south to the intersection with Middle and Windcrest Roads, where the Formula Ford Lincoln dealership is located. I rode this unaware that a dense fog was quietly rolling in behind me. Riding the return leg and the remaining side streets through this fog was like riding on an altogether different day. Though traffic was light I had to be hyper aware that the few motorists that were out and overtaking me were doing so at a safe distance. After only 17 miles of riding I was able to put Rutland Town, City and County in the completed column, happy with the success of my sunrise plan, and bound for home by about 7:15 AM.

August 24 and 25 was a two day ride with an overnight stay in Brattleboro to complete the remaining towns of Windham County. On the first day, working north to south, the roads of Rockingham, Westminster and Putney were completed requiring 73 miles and over 4400’ of climbing. Lunch was another BBQ enterprise, this one Curtis’ All American Bar-Be-Que in Putney which if I recall correctly has been serving BBQ since 1978.

Highlight of the day was with the final turns of the pedals as I entered the Brattleboro Holiday Inn parking lot in the early evening and of all places had my second sighting of a black bear. 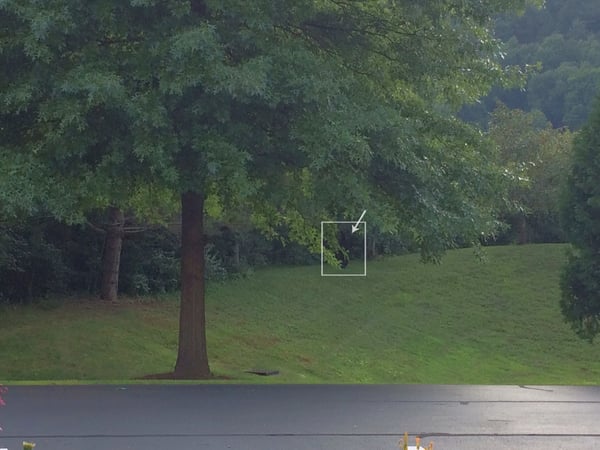 This one was an adult standing on its hind legs and working several apple trees on the hotel grounds about 200’ from the main entrance. Cindy and I watched it for a minute or two. I captured it in a fading daylight photo before it meandered off. See it standing and peering slightly around some tree branches at us.

Vernon, Guilford, Brattleboro and Dummerston were added to the list on the second day of this trip requiring 66 miles of riding and 3600’ of climbing. The days’ riding included two more crossings of the Connecticut River and three launches from the Massachusetts border. The first of these launches was from the upper portion of Huckle Hill Road in Vernon. I was rather happy that the climb to this launch point was completed by car; descending it by bicycle I hit 46.5 MPH with hardly any attempt to generate that speed. 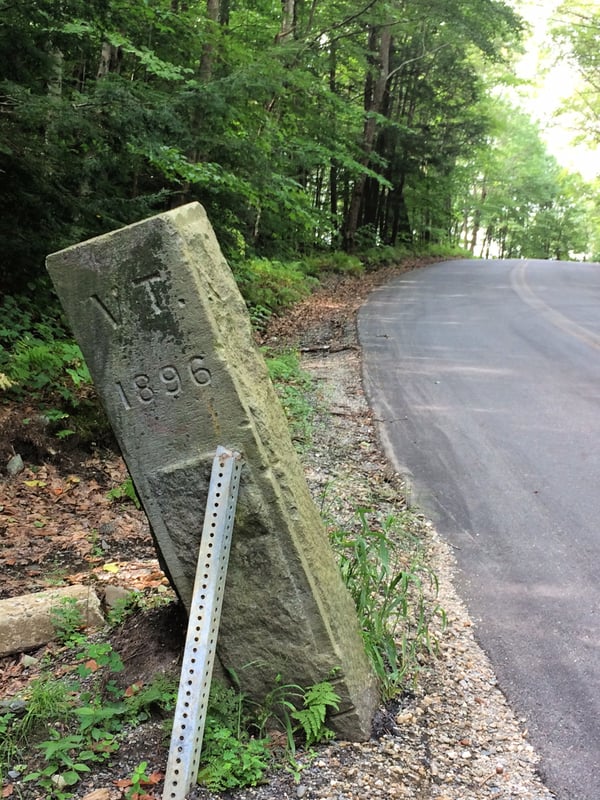 The second borderline launch was on Route 5 which I rode north to Brattleboro to meet up with Cindy for lunch at the Vermont Country Deli on Route 9 just a little west of I-91. The generic sounding name of this store belies the variety of tasty prepared foods inside. We enjoyed their most popular maple barbecued pulled pork and macaroni & cheese which they literally sell tons of. A variety of pies and massive cookies were a temptation that in retrospect I really, really wish I had succumbed to! Worth a stop if your travels take you that way and one we will go back to.  Lunch was followed by more riding to West Guilford and then the days’ third launch from the MA border, this time on Weatherhead Hollow Road which I rode north to Guilford Center Road.

With Guilford finished, only the Town of Dummerston remained to be completed on this trip. Departing from the Brattleboro downtown on Route 30 I welcomed the flat riding along the West River. After completing the Upper Dummerston Road by the Brattleboro Country Club the final launch of the day was from the intersection of East West Road and Route 30 at the West Dummerston Covered Bridge.

This 280’ long two-span bridge built in 1872 is of the Town Lattice design and is the longest covered bridge that is entirely within the State of Vermont. Riding the East West Road eastward towards Dummerston Center led to my late day discovery that it sits atop quite a hill, requiring of me one more grinding climb for the day up this otherwise pleasant wooded road. The days’ riding concluded with Middle Road from Dummerston Center to the intersection with Route 5 which was generally a descent and a welcomed one.

In my next blog I’ll describe a return trip to Northeast Kingdom to finish some missed roads in Canaan which I had previously counted as a completed town, and finding/discovering Lewis which is the last remaining town of the 251 which I have not ridden some part of and which has no town maintained of any kind. With the completion of each town my thoughts are more and more focused on how, and if, I can will my body and bike up Lincoln Gap in the Town of Warren which I have reserved as the final road and town of this quest.