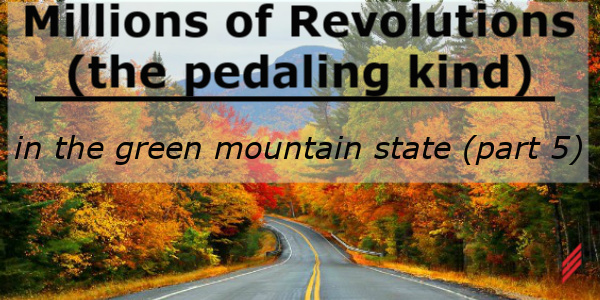 After the jump start I got off to in the Spring when I completed 18 more towns in my quest to discover and cycle all the paved roads of the Vermont Official Road Map, I had roads in 21 remaining towns and cities to complete by the time of the calendar flip to June. In the months of June and July I made more progress with a solitary day of related riding in each. Unrelated to my Vermont roads project, July also included a vacation trip to Montana and a bucket list bike ride on the Beartooth Highway.

On June 22nd  I completed the remaining roads in the towns of Cavendish, Weathersfield, Chester and Athens with 78 miles of relatively flat riding, less than 3,000 feet of total ascent. Following the drive south, preparation for the day of riding began with a fine breakfast at the Vermont Apple Pies Breakfast Bakery Restaurant on Depot Street in the Village of Proctorsville in the Town of Cavendish. Riding started at the end of pavement on the Twenty Mile Stream Road heading south, then Route 131 East to Downers Corners in Weathersfield followed by Route 106 North to my turnaround point at the Rockledge Farm Woodworks. This hardwood furniture and woodenware shop and gallery is one of over 70 attractions listed on the Official Map and had been the southern stop and turnaround point of a ride a number of years prior. Perhaps there’s a future riding project for me revolving around visiting all 70 of these attractions.

Doubling back on 106 South towards Springfield I followed Stoughton Pond Road and Reservoir Road past the North Springfield Lake Flood Risk Management facilities constructed and operated by the US Army Corps of Engineers. The facilities were constructed between 1958 (a good year!) and 1960. I’ve encountered a few of these on my bike travels and their scale which is seemingly engineered for flooding of biblical proportions is always impressive. Here, the North Springfield Lake upstream of the dam is capable of storing 16.7 billion gallons of water, the equivalent of 5.9” of rain over a 158 square mile drainage area.

Early afternoon riding included several roads in North Springfield, Route 10 West and Route 103 South to Chester. At mid-afternoon Cindy & I enjoyed a relaxing stop and a fine lunch on the front porch of the Fullerton Inn & Restaurant on Common Street in Chester. The day finished with more riding in Chester to complete this town, then further south to complete Athens and to partially complete Grafton.

On July 8th  we returned to Windsor and Windham Counties to complete the towns of Windsor, Springfield, Townshend, Grafton and parts of Rockingham. I tallied only 46 miles but with nearly 5000’ of climbing. The primary goal for the day was successfully climbing the Mount Ascutney State Park Toll Road to complete the Town of Windsor. This road of 3.7 miles, denoted on the Official Map as a Recreational Paved Highway, ascends about 2300’ at an average gradient of 12% and a maximum of 19%. This would be my first time traveling over it by any means. 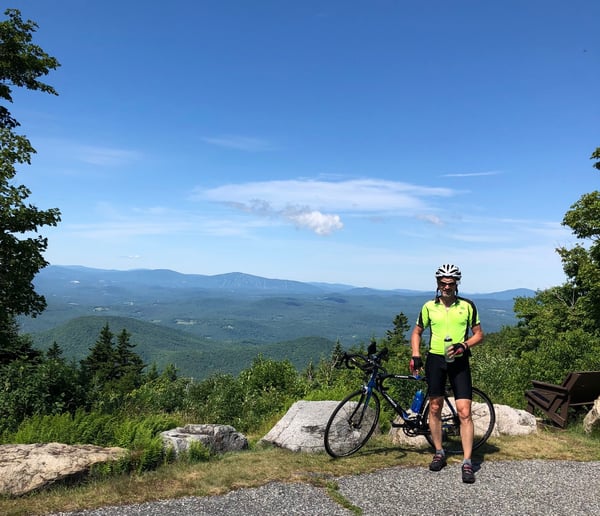 The entrance to the park is off Route 44A and the climbing starts immediately from the entry fee and info station with almost no reprieves in the gradient along the distance. This road has many twists and turns nearly each of which once reached mercilessly revealed a steady gradient to the next. I “recreated” for an hour to complete the climb with a short breather at the 2 mile marker. The views from the top are worth the trip if you have the opportunity. 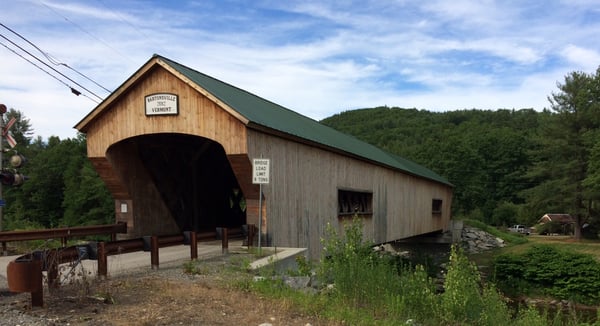 After racking the bike, my riding resumed in Springfield and Rockingham and included a crossing of the Williams River over the new Bartonsville Covered Bridge on the Lower Bartonsville Road in Rockingham. The new bridge replaced the old covered bridge which was built in 1870 and was another of the Town Lattice design described in my prior blog. The demise of the 141 year old bridge was the work of Hurricane Irene which hit Vermont on August 28, 2011. This former local landmark was captured on the nationally seen video being swept downstream by the floodwaters. After a lunch break at Two Neanderthals Smokin’ BBQ on Route 106 in Springfield, the days riding concluded with completing the roads of Grafton. The Mount Ascutney climb along with the lesser ones on this day resulted in a 10.6 MPH average for the day, my lowest of the year! 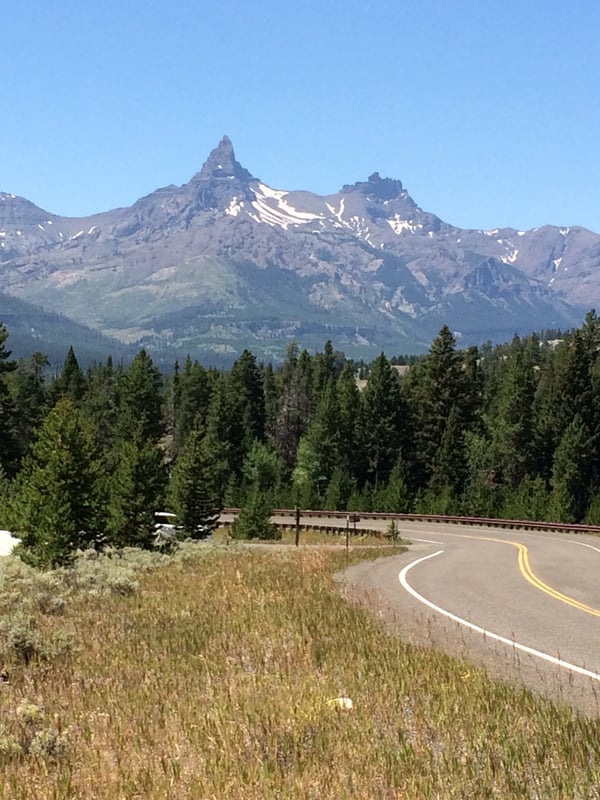 In late July Cindy and I vacationed in Montana and Wyoming to visit, for our first times, the Yellowstone National Park, the Grand Tetons and the Bozeman, MT area. We had been talking about doing this trip for a few years to see the sights and do some road biking. At the top of my ride list was the 69 mile Beartooth Highway traversing over the Beartooth Plateau. Charles Kuralt called it “The most scenic drive in America” and travel materials that I had read about it described it similarly. This Highway is the section of US 212 between Red Lodge, MT and the Northeast entrance to the Yellowstone NP. It starts and ends in Montana but loops through Wyoming for about half the distance. The summit at Beartooth Pass in WY has an elevation of 10,497’. The Highway is typically closed for the winter by around Columbus Day and it can snow at the summit any month of summer. 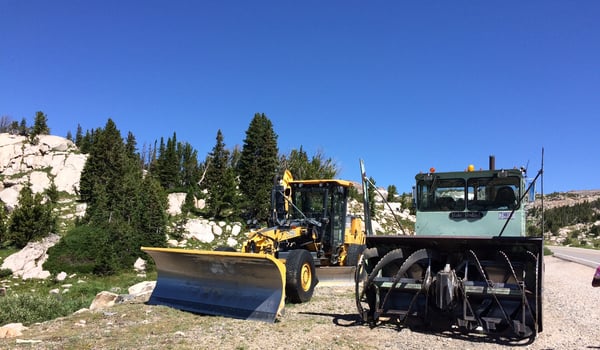 Our first experience of the highway was on a late Friday afternoon as we were driving to our hotel in Red Lodge after departing from Jackson, WY in the morning and spending much of the day in Yellowstone. The views were as stunning and spectacular as advertised. As we approached the summit the weather turned a little nasty with a slushy precipitation and as we climbed into the clouds visibility became very limited on what can be a daunting road in the best weather conditions. The Highway with its numerous switchbacks carved into the mountain sides is a civil engineering work of art. We safely made our way but my reasoning mind was questioning if riding this on a bike the next morning was going to be such a wise and wonderful experience. 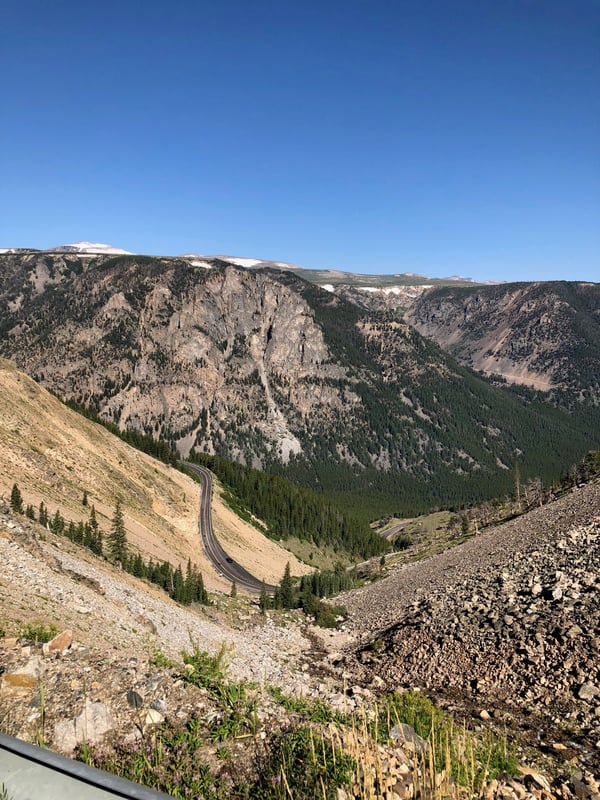 Red Lodge is an 1880’s coal-mining and ranching town and US 212 runs through the town as Broadway Avenue. We were there on the weekend of their popular annual Cruisen Classic Car Show with many owners displaying their pride and joys along both sides of the street for many blocks.

The elevation at Red Lodge is about 5,500’ and the distance to the Pass around 30 miles. I set off from our hotel by 7 AM on my rented road bike with a forecast of late morning rain providing some added urgency. With Cindy supporting, I arrived at the summit about five delightful hours of riding later; a truly memorable, unique and thoroughly enjoyed ride. This image will give you a sense for a part of the Highway traveled. 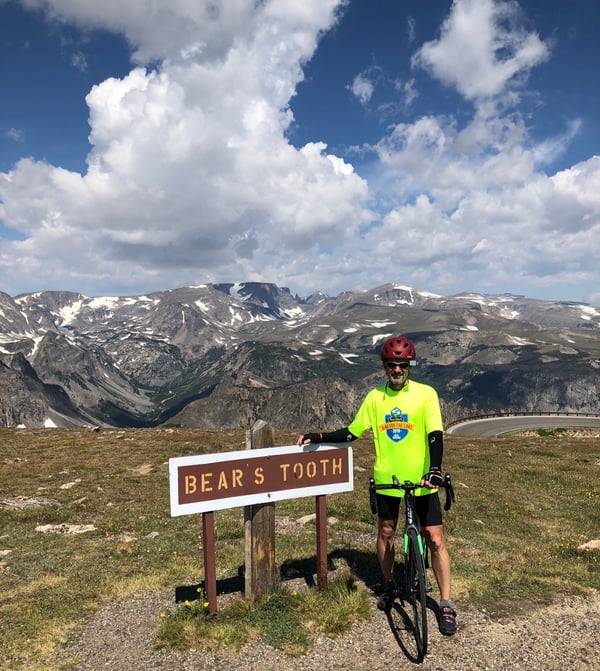 The rain showers did not hold off long enough for me to make a dry descent back to Red Lodge which made for a chilly and hurried ride with gravity doing all the work for many of the miles. We returned from Bozeman two days later to ride the remainder of the Highway, commencing this time at the summit and riding westward and mostly downhill, un-earned this time, to Cooke City. This is a Highway to experience if you ever have the opportunity!