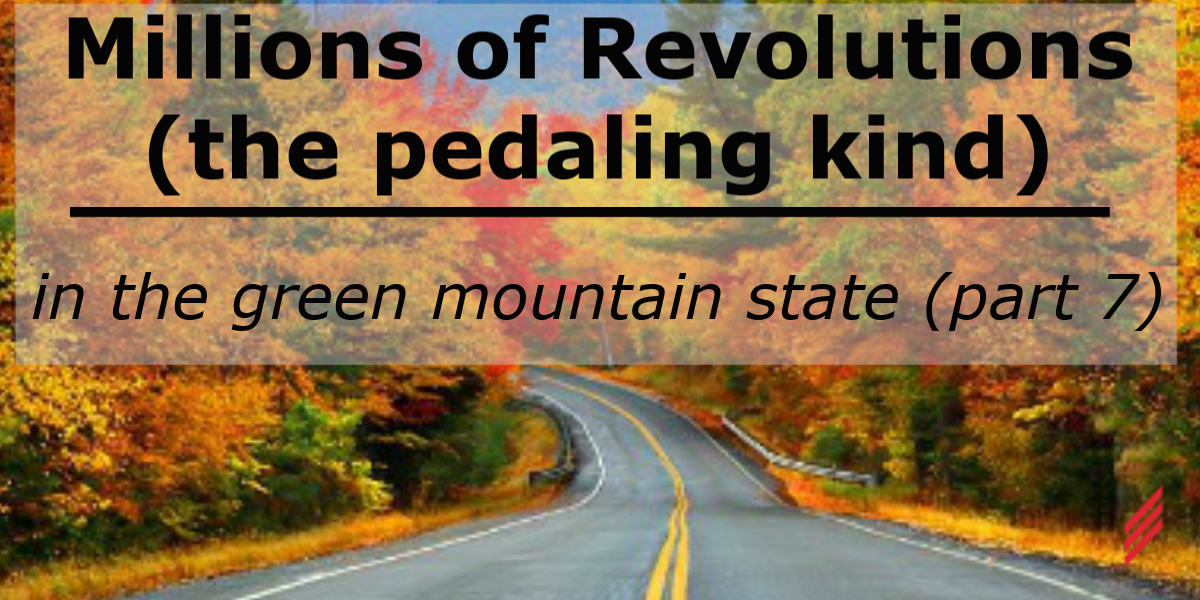 On September 8 Cindy I traveled to Vermont’s Northeast Kingdom (NEK) to find the town of Lewis and ride some of its gravel roads. Lewis was the last remaining town of the 251 cities and towns that I had not previously ridden any part of. The trip was also made to complete some previously missed paved roads in the town of Canaan, number 250 in my quest to ride all the paved roads that appear on the Vermont Official Road Map. Midway to the NEK we took a break from the car seats for a return visit to the Carriage House Café and Grille in Orleans to enjoy a couple of their hearty breakfasts.

Which Way to Lewis

The town of Lewis has no paved roads, no Town maintained roads and per the 2010 census had no residents. The Nulhegan Basin Division of the Silvio O. Conte National Wildlife Refuge occupies much of the land area of Lewis as well as parts of neighboring Bloomfield, Brunswick and Ferdinand. Lewis does have a network of logging roads but figuring out how to get within the town borders was not obvious using my Vermont Atlas & Gazetteer. I had previously considered taking Lewis Pond Road off Route 105 at Wenlock but after finding some ambiguous signage about a road barricade that would be encountered decided I would first do a little more research.

To reach Lewis we drove what is considered the back entrance to the Refuge by taking Henshaw Road off Route 105 in the Village of Island Pond in Brighton. The more commonly used entrance is the Stone Dam Road off Route 105 in Bloomfield. From the brochure for the Division, it was established in 1999 with the purchase of 26,000 acres from Champion International Corporation. “The basin was formed when a pool of magma solidified below the earth’s surface more than 300 million years ago, and slowly eroded creating a crater-like “basin” roughly 10 miles across.” It is home to an abundance of wildlife and “possesses among the largest state-wide populations of moose and black bear” and is a “premier region for both hunting and fishing”. On our drive we encountered for just a few seconds what I think was a young coyote that darted out of the woods from one side, across the road just clear of my front bumper and disappeared into the woods on the other side.

There are over 40 miles of logging roads throughout the refuge that are generally narrow and with signage warning that trucks have the right of way. At one time bicycling on these roads was prohibited but a returned call from the Headquarters/Visitor Contact Station confirmed that this was no longer the case. On our drive into and out of the basin we encountered a solitary vehicle which fortunately was not of the logging truck variety. We drove the Four Mile Road past the Mollie Beattie Bog site to the intersection with Lewis Pond Road. My “road” bike riding in Lewis was limited to a half mile of Lewis Pond Road from this intersection. With the doubling back this single mile of riding I deemed sufficient to say I had ridden some part of Lewis. I hope to someday return with a suitable bike to better explore and experience the Bog, Lewis Pond, the Lewis Mountain Overlook and the advertised wildlife.

The Most Northeast Place in the Northeast Kingdom

The paved roads I needed to complete in Canaan amounted to less the 5 miles on several spur roads off Route 114 in this most northeastern town of Vermont bordering with Canada and New Hampshire. I had previously included Canaan on my list of completed towns until I later discovered with further study of the Official Road Map these few roads I’d missed on my initial visit.

I began the ride at Norton, another border town, about 15 miles to the west of Canaan and included short run-outs and turnarounds at the U.S. Customs Stations at Norton and Canaan and up to barricaded roads when in simpler times citizens moved quite freely between the U.S and Canada. In Canaan, Route 253 leads to the Village of Beecher Falls which is home to an Ethan Allen furniture plant, another Customs Station and 177 residents at the time of the 2010 census. Customs agents at two of these three stations hailed me back for some questioning. They had both noticed me only after I began heading back away from their stations and not having seen me first approach and then turnaround had to verify that I was not entering the country illegally.

My only prior time travelling to Beecher Falls was around 1980 when my work for another consulting engineering company took me to the Customs Station there to survey for a GSA project we had been awarded. For my part, this project required the design of heating, ventilating and plumbing systems renovations for accessible public restrooms at this station, other stations along the Vermont/Canada border and at Federal buildings throughout the interior of the State. This was about 10 years before the ADA became law. 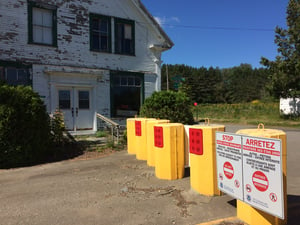 Studying maps and satellite images, I discovered something new to me about the international border geography in this corner of the State. In Vermont this border essentially follows the 45th parallel and runs to the north of it by a varying amount of a mile or less.  The northward turn of the borderline along the west side of New Hampshire is not a continuation of the Vermont/New Hampshire border at the Connecticut River but rather along the Halls Stream about 1-3/4 miles to the west of the river and just east of Beecher Falls. Along this 1-3/4 mile stretch of borderline between the stream and river, Canada is not Vermont’s northern neighbor! Here two roads, Halls Stream Road and River Road, are the only roads in Vermont which if taken northward across the border will deliver you not into Canada but rather into Pittsburg, NH. 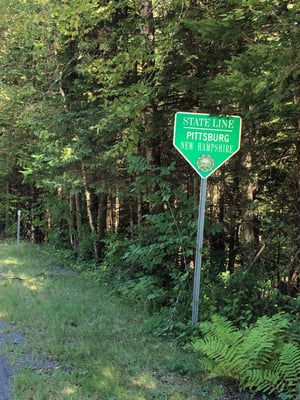 That northern turn of the US/Canada border loosely follows the serpentine path of Halls Stream which flows south to the Connecticut River. From satellite images, the border line here resembles a completed connect-the-dots exercise with randomly angled line segments that frequently crisscrosses this small waterway. The history behind how this line was established was a curiosity to me that I mentioned to my son Joel who is interested in all things geographical and historical. He researched this and informed me that this border placement was an outcome of the Treaty of Paris signed between Great Britain and the United States of America to set the boundary between British North America and the U.S. Pertaining to the border that today separates New Hampshire and Canada, Article 2d of the Treaty in part reads “along the said Highlands which divide those Rivers that empty themselves into the river St. Lawrence, from those which fall into the Atlantic Ocean, to the north-westernmost Head of Connecticut River; Thence down along the middle of that River to the forty-fifth Degree of North Latitude; From thence by a Line due West on said Latitude….”. Where exactly the north-westernmost Head of Connecticut River lay was the source of many disputes and was not definitively established until the Webster-Ashburton Treaty of 1842 specified that Halls Stream was in fact the waterway and the border. An official survey was completed in the 1840’s and then renewed in 1908 using up-to-date geodetic methods. Prior to 1908 the borderline shifted with the changes of the streams course. Since 1908 this line has been set but the course of the stream continues to change with time and has changed by as much as 800 feet in some places.

A southbound traveler of Halls Stream who put their watercraft in only 5 miles north of the Vermont border would cross between Canada and New Hampshire over 40 times before arriving in Vermont en route to the Connecticut River. By my unofficial count if this river traveler was bound for Long Island Sound they would pass below 38 bridge spans connecting the Green and White Mountain States before arriving at the Massachusetts border; among them three wooden covered bridges, four Interstate spans and six rail-line crossings.

I decided some time ago that the Town of Warren would be the final town, number 251, and its Lincoln Gap Road of a little more than 4 miles would be the crowning ride of my paved roads quest. In my next blog I’ll describe some gearing alterations to improve my odds of climbing this mountain road and the concluding ride of this labor of love project. 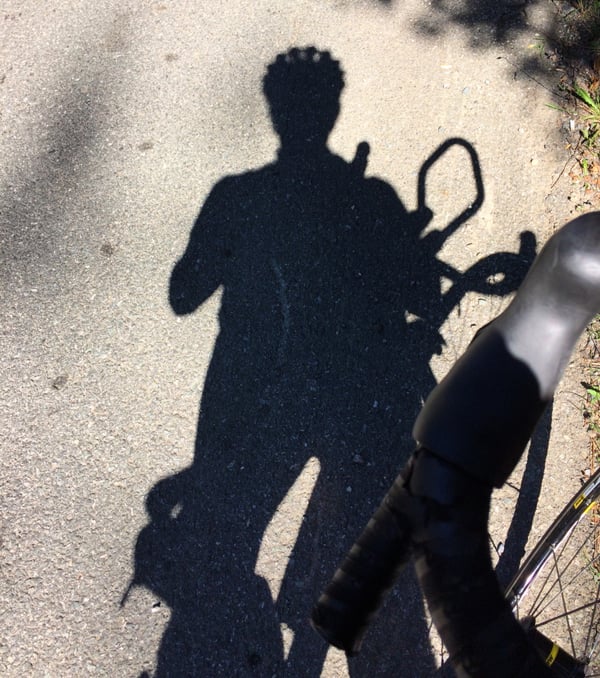